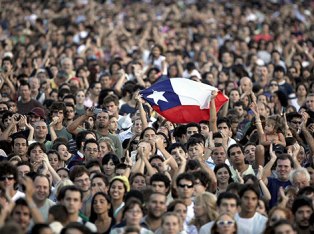 Want to know more about the Chilean people? Read on for facts and info on the people, customs and traditions of Chile…

The people in Chile can be classified into Whites and White-mestizos. The whites are descendents of Spaniards including Basques, and a small mix of Croats, Swiss, English, French, Germans, Irish and Italians. The White-mestizos are a racial mix of Spanish tribes and Amerindian tribes. The Spanish lineage can be traced back to the Basque, Castilians and the Andalusians; the Amerindians hail from the extinct tribes of Diaguitas and Picunches and the present Mapuches.

The Chilean national identity is termed as Chilenidad and there is a high degree of homogeneity. The ethnic structure comprises 30% white, with Mestizos making up a 65% of this segment. A recent study however shows that 52.7% of Chileans are white. Some sources like the CIA go so far as to classify 95.4% of the population as white.

The Spaniards from the colonial periods and the Basques of the north comprise the largest group of Whites in Chile followed by the French from the south of France. The total percentage of Basques in Chile is anywhere from 10% – 27% which is almost four and a half million inhabitants.

Other immigrants hail from Italy, Germany, Austria, Greece, Portugal, Yugoslavia, Scandinavia, Holland and other European countries and settled on the northern and southern extremities of Chile comprising of up to 420,000 immigrants.

The Croats from Yugoslavia numbered up to 500,000 and were major contributors to the economy, culture and politics of the country.
The present day German community in Chile hails from the massive German influx of 1848 into the south. This was a Chilean government initiative to colonize the south with German speaking inhabitants hailing from Austria, Switzerland and other European countries.
At the end of the Spanish Civil War 2200 Spanish Republicans arrived in Valparaiso on the Winnipeg, a French ship utilized for immigration.

This influx was followed by the Palestinian entry into the region forming their largest community outside of the Arab world. Some Armenian, Lebanese and Syrian Arabs also form part of the Middle Eastern community. Thus Europe and the Middle East contributed significantly to create this melting pot of cultural and social homogeneity till the 20th century. With the opening of the Panama Canal in 1920, there was another entry point for immigrants eager to settle down in this coveted land.

Religion of the Chilean People

With a multi ethnic background prevalent in the Chilean society, it is but natural that a myriad of religious beliefs are prevalent in the region. Catholics make up 70% of the population followed by Protestants or Evangelical 15.1%, the Jehovah’s Witnesses comprise 1%, The Church of Jesus Christ of Latter-day Saints 0.9, Jews make up 0.4%, whereas the Atheists are 8.3%, Muslims 0.1% and Others 4.2%. The declared religions among inhabitants 15 years and above are available on the 2002 Census data.